When hauling manufactured panels from the factory to the job site, there are over-the-road restrictions on trailer lengths that apply to the transport of lengthy panels. Consequently, jobs with panel lengths of 100 feet and up often require that the panels be roll formed right at the job site.

That was the case at the Silver Run Elementary School in Moorestown, New Jersey, where fabricator ADPI of Avenel, New Jersey, decided to roll form the panels with Englert equipment at roof level, using a crane to hoist a standing seam machine to the edge of the roof where the panels would be installed. ADPI’s team of seasoned fabricators also built what looked like a football crossbar made out of steel and planted it in the ground about four feet from the base of the school building. That crossbar played an important role in stabilizing the roll-forming machine against the side of the building while ADPI workers ran panels.

Each panel was run out of the machine across the top of the old roof. Fabricators would run each panel about three feet onto the roof where a small set of wheeled casters were attached to the front end of the panel. Then using the casters to smooth the movement of the panel, the operator ran scores of panels up to 136 feet in length. When a panel was run, a team of seven workers, spread across the width of the roof, lifted the panel in unison and walked it to the place where it would ultimately be installed. When that was completed, the machine was moved to another section of the roof, a new crossbar was built and the process was repeated. 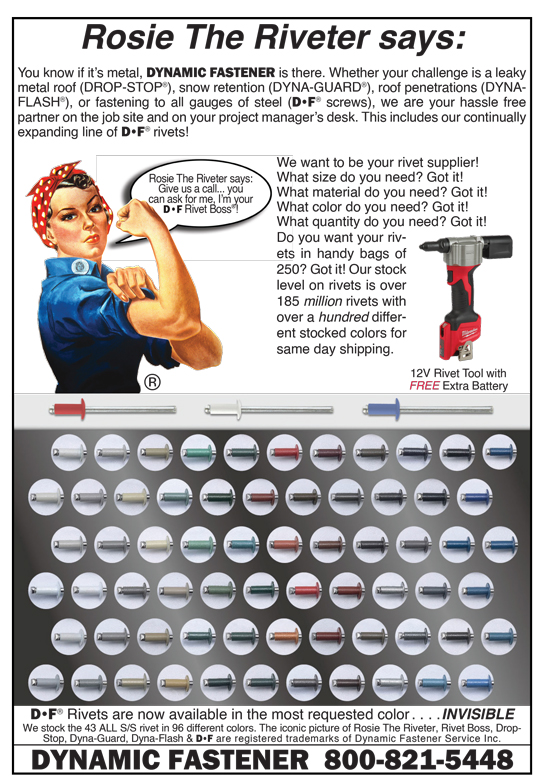 The installation process was particularly practical because the southern part of New Jersey where the school is located had been plagued by days of heavy rain at the time. The installation crew was able to run off enough panel for the installers to cover open framing on exposed areas of the old roof. RF