Pioneers have a distinctive characteristic: They recognize and pursue trends ahead of the curve. Dave Higgins and his father Jim were among the first to identify two important trends in the Midwest: post-frame construction and regional roll forming. Built on both pillars, today Higgins Construction Supply (aka Higgins Steel Roofing) of Hillsboro, Ohio, continues an innovative tradition.

Jim, the elder, founded the original company, Higgins Construction, in 1958. Dave relates that his father, who died in 2018, was the first professional post-frame builder in Southern Ohio. He was also a founding member of the National Frame Builders Association and member of the NFBA Board. When he started his business, it was a good time for post-frame, and Hillsboro was a good rural area in which to do business. 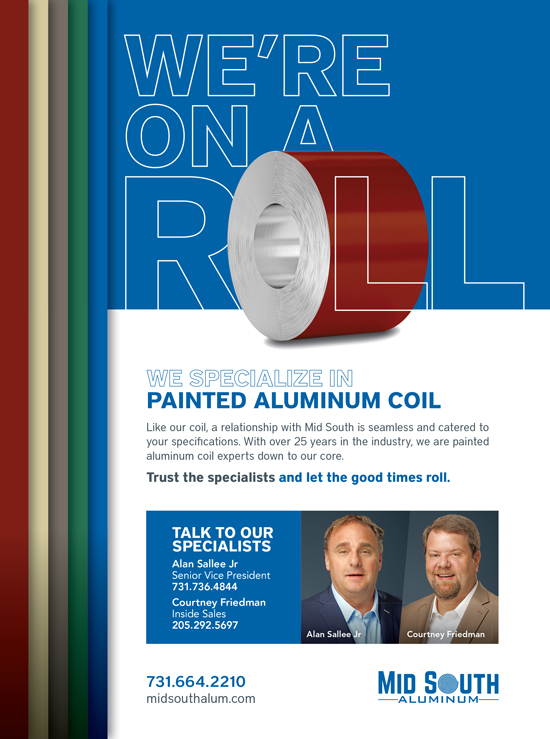 In the late 1960s through the 1970s, the Higgins business expanded to build steel buildings and grain bins for Butler Manufacturing. In all, the company built more than 2,700 mostly ag-related buildings, post-frame and steel-frame combined.

The impetus for business success often begins with recognizing a problem that’s begging for a solution. The problem was getting supplies delivered from the supplier to the jobsite in a timely manner. In a contractor’s world, time is money. Dave and his father believed they could shorten the wait. In 1980, they made the transition out of construction to materials supply, selling precut panel and post-frame lumber from a shop on the family farm. They were buying 48,000 pounds of steel by the truckload in 32-foot-long sheets and cutting to size inhouse. “We could cut about $1,000 worth of steel an hour,” Dave said.

They had a good business, but when supplies dwindled, the waiting game was still too burdensome, taking 10 to 14 days to get resupplied with precut steel.  Their panel supplier wasn’t always reliable. Getting rigid rib steel was, as Dave said, “becoming a problem.”

There was only a handful of metal panel suppliers in those days serving the entire U.S. “So the whole thing was, how do we produce more steel?” Dave said. Enter the thought of adding a roll former to the business and cutting out the middleman.

It was a young and feisty Dave who nudged his father towards the roll-forming business, which was a renegade move at the time. Regional rollformers didn’t exist in Southern Ohio, much less in much of the country. So, it was Dave who took the lead. His first stop: the local library. 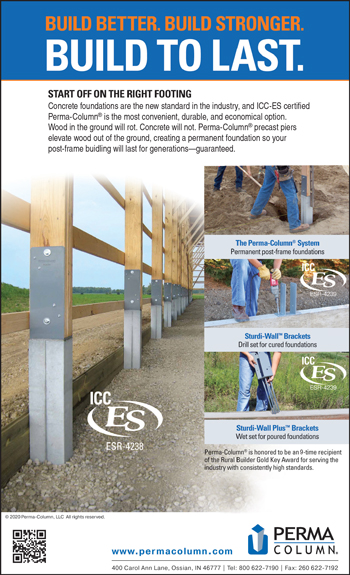 “I went to the library, and I grabbed a Thomas Registry and started looking at roll-forming equipment,” Dave explained. In the early 1990s, there were not a lot of options. Of the three he found, he chose Bradbury, the only one of the three companies still intact today.

It was 1991 and many advancements common today with roll formers were nonexistent. “Back then, you had to pull 5 miles of wire into conduits. It was not like today when [roll formers] come pretty much prewired and they truncate all the cables,” Dave said. “It was step ladders and 60 spools of wire, and you had to mark everything, then pull it through. An electrician and I worked for 2½ weeks to pull all this wire and get it hooked up.”

His next task was to find a reliable coil supplier. “Back in the day it wasn’t as easy as it today,” he said.

A friend advised him to contact the National Steel Service Center, “but being the person who didn’t exactly listen to what I was told, I picked up the phone and I called information to get the phone number for National Steel Corporation.” The number he was given was for the headquarters, not the service center. Instead of talking to a sales associate, he was answered by the head guy in the coil division. It was a fortuitous error. “We went direct right from the get-go,” Dave recalled. “The stars aligned and that’s how that happened.”

It was just Dave and his dad in the early days. “We started with just one roll former, and we broke our trim on an old Chicago brake.”

They still own the first roll former (now being used at a second location) and the old brake, which he says: “we keep just for giggles; if the power goes out, we can still bend trim.”

From the beginning, it was obvious that the move to roll forming had been a good one. Their supply business began to grow as they condensed the wait time for supplies. While most builders were still waiting 10-14 days for steel, the Higgins team was able to chop the delay to their customers to just 24 hours.

It was a trend that was still in its infancy in the Midwest and threatening to upset the status quo. To exemplify just how disruptive, Dave recalls overhearing a conversation at a national trade show between several guys in suits from one of the big panel suppliers. “They were complaining about some guy named Higgins in Southern Ohio goofing up their territory,” Higgins laughs at the memory. “That’s the day I knew we were doing something right.”

The Higgins family found a welcoming market in Southern Ohio. One Bradbury roll former led to three. Two employees led to 20. One location expanded to two: the original at Hillsboro and the second approximately 70 miles away in Jackson operated by Dave’s son Ben.

Jackson was opened about eight years ago. The original Bradbury was moved there after a complete retooling. “We put all new electronics on it, all new uncoilers,” Dave said. “The retool actually cost more than the original roll former.”

At the time of this interview, it was soon to be joined by a new board and batten machine from Metal Rollforming Systems so the company can capitalize on the growing popularity of the profile.

Higgins offers steel roofing plus related trims, post-frame packages, some vinyl siding, aluminum soffit and general hardware. They cater to a wide market of customers from farmers to post-frame contractors, DIYers, ag and residential contractors, and a few lumberyards, all within a 50-100 mile radius. Occasionally they have shipped out of state to help supply a storm-damaged Florida, and internationally to Chile, the Bahamas and France.

Ag panel with DripStop is a good seller. One machine is devoted to the product, also doubling as a machine for the NF-16. They have been using a new felt applicator from DripStop with satisfaction.

Quality has always been a priority. “Quality still sells,” he said. “We’ve never had issues selling it.”

They use only .0157 min (prior to coating), Class 4 hail-rated Galvalume steel that goes through quality assurance testing from Intertek.

Quality sells itself. Dave cites an example: “I was walking through the warehouse one day, and I stopped to talk to a customer who said: “I like your panel. When I walk on a roof, I don’t leave my footprints in it.”

Dave learned in the conversation that many of his competitors were using lighter steel (29-gauge .0142 nominal) that is more easily damaged during installation.

Coils are stored in an atmospherically controlled building. Temperature probes are placed inside some of the coils to monitor dewpoints. Dave explained: “Coming out of winter you’ve got temperature differential and you hit that magical number called dewpoint. If you get water on steel, you can ruin a whole lot of steel real fast.”

He can view the readings from a weather station on his desk and building conditions can be adjusted accordingly. “If we can open up [the building] and let the air flow through naturally we will, and if we can’t, it stays closed for the day and we use heat,” he said.

He uses technology wherever and however possible. “My whole world is how fast can we get things done,” he emphasized.

That efficiency has paid off. “We can out-produce any [rollformer] in Ohio,” he continued.

His employee base remains stable. “Most of my crew have been in the construction industry before, or they do some construction on the weekends, so they know what they’re doing on the install side.”

Despite several additions and changes, the home location still operates on the family farm.

Problem solving is engrained in the Higgins business model. A case in point is a solution they developed for eliminating a rippled eyesore common in overhead door trims.

“With overhead doors you have this big flat spot, and that flat spot bends a lot, so we tooled an overhead door trim, putting a wide, minor corrugation down the center. That removed most of the oil canning issue on a door jamb trim. And on a vinyl door stop that sits on the back of the door, that’s where you put your fastener,” he explained.

Dave indicated that they are always looking for new products or problem solvers to help distinguish themselves. Some are still in development stage. He looks to employees and customers for ideas.

“Ideas in my world are wide open,” he said. “I’m smart enough to pay attention to my customers and my crew, to listen if they say: ‘I have an idea for this.’ I don’t have the corner on the market. Some of the best ideas came from my crew or my customers. We’ll give everything a fair shot.” RF

Sharon Thatcher is the former managing editor of Rollforming Magazine. She is now an independent writer living in Ohio.